My self assessment tax bill has been paid and the final dividend laggards have paid up meaning I can now financially close out 2016.  This will hopefully be the third last quarterly summary after which the format will switch from an accrual of wealth format to one focused on wealth preservation as I start to drawdown in FIRE.

If you had have offered me 2016 on the 01st January 2016 I just wouldn’t have believed you.  When both savings and investment returns are summed I’ve increased my wealth by £263,000.  Quite a staggering number and a result which enabled me to both become a millionaire and to become financially independent (FI).

2016 was also of course the year of the Brexit vote which has resulted in Sterling weakening against many currencies.  Measured in Euro’s, which I need for my Plan A, it’s a more subdued EUR134,000 increase however I’m certainly not going to turn it down.

Given that I’m also now emotionally ready to FIRE I’m going to change the structure of these quarterly reviews a little to start to focus on what’s important to me going into FIRE.

Let’s look at the gory details.

I unapologetically continue to define Saving Hard differently than most personal finance bloggers.  For me it’s Gross Earnings (ie before taxes, a crucial difference) plus Employee Pension Contributions minus Spending minus Taxes.  Earn more and one is winning.  Spend less or pay less taxes and you’re also winning.  Savings Rate is then Saving Hard divided by Gross Earnings plus Employee Pension Contributions.  To make it a little more conservative Taxes include any taxes on investments but Earnings include no investment returns.  This encourages me to continually look for the most tax efficient investment methods.  I finished the quarter with an uninspiring Savings Rate of 44.9% against a plan of 55.0%.  Don’t worry it wasn’t a Christmas blow out but the result of PAYE tax on my earnings (as always) combined with the added bonus of a self assessment tax bill.  Over the year my physical spending remained well in control with spending being only 8% of Gross Earnings plus Employee Pension Contributions. 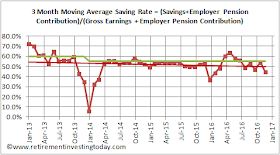 Saving Hard score: Conceeded Pass.  I can’t give myself a pass as I’ve missed the target but given my savings rate is 92% under the traditional financial bloggers measure, which even trumps (no pun intended given yesterdays ceremony) Jacob of Early Retirement Extreme’s 75%, I’m not going to beat myself up about it.

To be able to successfully FIRE I think two things need to occur:
If you’ve planned well then the first one is easy to recognise and watch for as you can simply see how far away from your number you are during the accrual period.  Then it’s no more complicated than one day you’ve passed that threshold and you know you’re done.  I’ve had this one done and dusted for a while now.  I can also confirm I had no trouble recognising it.

Since calling financial independence I’ve continued to grow my wealth and if I’m honest it’s now starting to feel a bit like I’m keeping score at best and it’s my precious at worst.  Since having enough I’ve added a further £113,000 and when measured in the currency that matters to me I’ve added EUR82,000.  It’s time to start spending it and the reason I haven’t is because I haven’t been mentally ready. 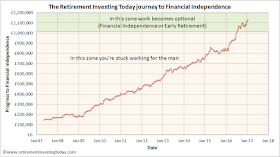 I’ve found that the mental readiness piece is more difficult to recognise as at least for me I didn’t know I was actually ready until I’d actually passed the threshold.  Let me demonstrate by using a few recent examples.  When I became financially ready I put on a wry smile, did a mini fist pump and we had a very small family celebration.  Then on Monday morning my alarm went off at the crack of dawn and I went back to doing what I’d always done.  I did that right up until just before Christmas.