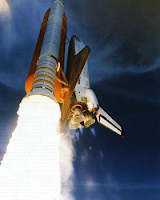 Quarter 1 has been what can only be described as one where the rocket boosters fired and subsequently propelled my personal finances forward at a rapid rate of knots.  I passed the one year to FIRE (financially independent retired early) mark during the quarter and then finished the quarter with wealth addition of some £55,000!  To put that into perspective that is more than half of what I achieved through the whole of last year.  Positively both my Saving Hard and Investing Wisely approaches made strong contributions: 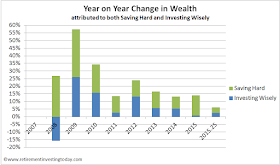 I define Saving Hard a little differently than most personal finance bloggers.  For me it’s Gross Earnings (ie before taxes, a crucial difference) plus Employee Pension Contributions minus Spending minus Taxes.  Earn more and one is winning.  Spend less or pay less taxes and you’re also winning.  Savings Rate is then Saving Hard divided by Gross Earnings plus Employee Pension Contributions.  To make it a little more conservative Taxes include any taxes on investments but Earnings include no investment returns.  This encourages me to continually look for the most tax efficient investment methods.

Even with a large portion of my bonus going to those better able to spend it, including HMRC, I was still able to save some £31,000.  This was possible by once again keeping spending nicely in control.  In fact my personal rate of inflation (ex taxes) compared to Q1 2015 was actually -7%.  An interesting dynamic has developed here.  With FIRE being so close my better half and I seem to have just sub-consciously battened down the hatches as we can see the finish line which is then self-fulfilling.

Combining Earnings, Spending and Taxes together results in an average Savings Rate of 48% for quarter 1 against a plan of 55%.  Sounds like a pretty poor effort until I also mention HMRC took 47%, including some back taxes, with us living off the remainder. 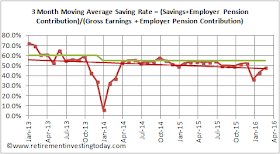 Saving Hard score: Conceded Pass.  I yet again missed my savings plan of 55% but against a back drop of back taxes I’ll take it.  Savings were also still able to add 3.6% to my wealth, which is not to be sniffed at, even at this late stage of my journey.  Savings also continues to make the biggest contribution towards my wealth accumulation with 67% now having come from savings and only 33% from investments.  Compound interest is still not really firing on all 4 cylinders.

Back in late 2007, at about the same time as I was starting to think about saving hard and investing wisely, I seriously considered buying a home in London.  We were still planning to live well below our means and not be greedy but even so the small home we found would have still resulted in a big mortgage.  As I do with everything I did my own research and came to the conclusion that property in London was overvalued.  It was charts like the below that gave me that view, with at the time London first time buyer house price to earnings ratio’s having averaged 4.4 since 1983, while they were now at record highs of 7.1. 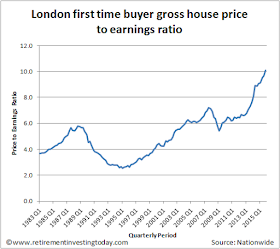 So as the type of person who tries to avoid buying anything that is overpriced I signed another Assured Shorthold Tenancy Agreement (AST) for our compact flat and we waited it out.  Roll forward to today and we can see what has happened to London house prices since that fateful period.