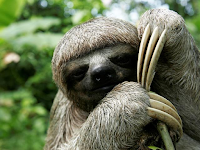 In response to this my investing strategy is unchanged despite having lost, on paper at least, over £53,000 from my peak 2015 wealth valuation even after new contributions.  That is multiple years of post FIRE spending and so not an insignificant amount of money.  I continue to passively rebalance but importantly everything is done in slow motion and contains no ‘backing the truck up’ or ‘going all in’.  I think of it as investing at the pace of a sloth.

I do this because even though there is lots of investing noise around I am very conscious that price down trends can occur for long periods of time.  Let me demonstrate with a chart looking at US stock market price downtrends. 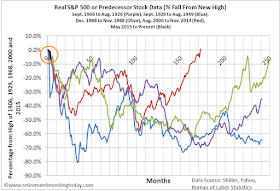 Is it unrelenting or just obsessive?

A few things combined have had me trying to answer a question or two over the past day or so.  Why do I think I can FIRE (become financially independent and retire early) in less than 10 years, with £1 million, when the vast majority of people won’t ever even think about it, will dream about it and think it’s impossible or will simply fail trying?  What right do I have to even consider this when I'm not from money and will certainly have no inheritance to help me on my way?

The question becomes even more relevant when I take a step back and think about the strategies I’m employing to get me there – earn more, spend less, minimise investment expenses, minimise taxes and invest in a balanced portfolio of different asset classes that are rebalanced both actively and passively.  The strategies are simple and there is certainly no secret sauce in there.

A couple of comments in recent weeks have started to give me an idea:
So just what is so special about my approach?  Why are the principles so simple but the desired result considered so difficult by many?  Why did I think I could FIRE when someone saving more than me at the same age of life and who is younger than me when I started my FIRE journey think they can’t?  Why is my planning so exhausting for others?  Some thinking has identified one natural trait I have in general life which could explain this – I have a natural ability to set a few long term very difficult goals which I don’t know how to achieve when I set them, can plan directionally towards them and can then go at them, even if it takes years, like a Rottweiler until they are achieved.

Let me try and demonstrate with an example from one of my strategies – Earn More.  My real (adjusted for inflation) taxable earnings as a multiple of my first graduate salary are shown in the chart below.  My records are a little poor pre the 2001/2002 tax year and so here I've just used my basic salary as I know I was saving very little into a pension and certainly wasn't achieving bonuses.  Right of the orange line is the period where I have been actively on my FIRE journey.  The boxed numbers identify my age in that year. 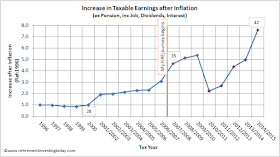 Click to enlarge, RIT’s Increase in Taxable Earnings after Inflation

Saving Hard has thus far been one of the biggest contributors to my reasonably rapid FIRE (financially independent retired early) Number progress.  For me this has never been about simply spending the least amount possible but instead always about maximising the answer to the formula Earnings – Taxes – Spending.  This results in a twofold approach:

With this in mind I suspect my spending profile will look quite strange when compared to many, but hey we’re all different and that’s what makes the world an interesting place.

In July 2015 I spent £1,926 (an annualised £23,112) and 2015 Year to Date I've averaged £2,068 per month (£24,816 annualised).  This covers all family spending, whether for fun or just too live, plus any personal spending that I desire.  The only thing excluded is my better half’s small personal spending.  Given this is hopefully my final full year before FIRE I want to track my full 2015 average spending as well as monthly for a couple reasons: 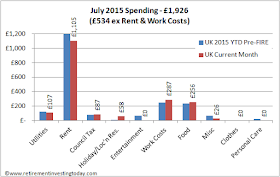 A little over a year ago I cried enough of the derisory instant savings account interest rates that were being offered by the banking sector, which after inflation and taxes, meant the value of my wealth was going backwards.  A quick trip over to Money Saving Expert reveals that the problem still exists.   The market-leading rate if you want instant access to your money is 1.6% meaning a higher rate tax punter, after inflation of 1.0%, is going backwards by 0.04% annually.  Additionally, this rate then reverts to 1.1% after a year meaning you have to do the savings account dance all again.  Even the best 3-year fixed rate account is only offering 2.65% meaning after inflation of 1.0% and higher rate tax our punter would only be getting ahead by 0.59%.  The chart below shows it’s been like this for a long time now and with no sign of an up-turn. 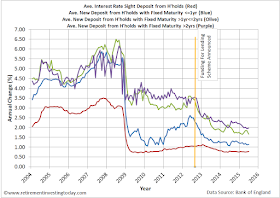 Meanwhile, while this has all been occurring I’ve been quietly shifting/building wealth with peer to peer (P2P) lending (while of course acknowledging that P2P has a different risk profile to bank savings accounts) as an alternative to a bank savings account.  Today I have as much money invested in P2P, £43,000, as I do in savings accounts.  Since starting out in May 2014 I’ve earned interest/bonuses of £1,342 which after taking into account deposits/transfers occurring over time is an annualised 4.3%.

Given my successes so far with P2P my interest was piqued this week when I was contacted by Lending Works enquiring whether there was any opportunity for us to work together.  At the time I wasn't using Lending Works as a P2P platform but I was aware of them as I know weenie over at Quietly Saving has money in their platform.  A few emails later we had agreed that rather than something like a boring advertisement that would add little value to readers I would instead run a published experiment with real money lent into the market.

Since starting this blog at 35 years of age in 2009 I have never revealed my portfolio values or targets in £ terms.  Rightly or wrongly I've always believed that it was irrelevant to readers given we all have different earnings, investments, risk profiles, savings rates and target retirement amounts.  This has resulted in posts that always focus on the theory and how I'm applying it but that in hindsight come across as dry and impersonal.

Today I'm going to try and change that by starting to talk in real numbers rather than percentages.  My hope is that it will up the debate a little and help us all continue to learn from each other.  I just hope it doesn't kill the community that has developed over the past 5 or so years.  Given the name of this blog and my closeness to FIRE (financially independent retired early) the amount of wealth I am trying to accrue is probably the number that is currently most important to me and probably one of the most popular topics debated/discussed within personal finance blogs and forums.  So let’s start there.

As a person who does not plan on receiving a State Pension and is not going to be receiving any sort of inheritance it is a crucial number for me as to fully FIRE it needs to be enough to last my family and I for the rest of my life.  That could be 45 or more years.  The methodology to calculate it was first devised back in 2007 when I first started on my DIY FIRE journey and went like this:
Dividing that FIRE salary by the expected return enabled me to calculate my number.  Today Excel tells me my early retirement number is £1,011,034.  To avoid discussions about me being obsessive compulsive let’s do a little rounding - I will be financially independent and have the option of early retirement with wealth of one million pounds.  My journey to the million is shown in the chart below.