It’s no secret that exchange rates can be and are volatile.  If you’re a person who’s earning in Pounds, has a reasonable portion of their wealth in Pounds and intends to retire in the UK spending Pounds then exchange rates are probably not going to lose you too much sleep.  Short term volatility might add a couple of hundred pounds to your continental holiday or repress the return on your international equities for a couple of years, where if you've made reasonable plans with a little contingency, is going to be noise in the scheme of things.  Long term volatility could end up resulting in some inflation but your Safe Withdrawal Rate has hopefully accounted for that as well.

Now let’s jump to somebody like myself and I'm sure I'm not along out there.  I'm earning in Pounds, have a reasonable portion of my wealth in Pounds, intend to retire early somewhere in the Mediterranean (still favouring Malta) but want to always give myself a chance of coming back to the UK if it for any reason turns ugly.  From today this is how the plans are unfolding:
1. 12 to 18 months still working for The Man in the UK and earning Pounds
2. Move to Malta (more likely Malta’s smaller island Gozo) and rent for 6 months to be sure I still love the place and know exactly which region I want to live
3. Buy a home for my family
4. Live happily ever after spending Euro’s but with my wealth still set up assuming the UK is home.  Longer term I may start to tilt more towards a European home assumption but that would be very gradual and take many years.

So I'm more heavily exposed to the GBP (Pounds or £’s) to EUR (Euro or €) exchange rate.  The Euro first started on the 01 January 1999 as an accounting currency and the chart below shows its monthly performance up to present day. 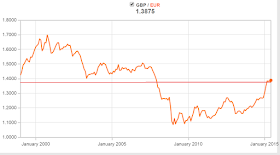 A Retirement Investing Today Half 1 2015 Review

On this blog I talk a lot about my own strategy and portfolio including how I'm managing and changing them as I learn.  Importantly, this is not a demonstration strategy or portfolio but instead reflects every penny I have to my name.  The journey also now represents a significant portion of my life with me now having been on this DIY Early Financial Independence (FI) path for seven and three quarter years which is nearly 20% of my life so far.  When I started in 2007 and even when I started this blog in 2009 I had no idea if I would succeed.  Today I'm far more confident that I’ll eventually get there and I also now believe that I have a level of personal finance knowledge that will enable me to self manage my portfolio to and into Early Retirement.  Even so I’m not yet going to relax.  At some point I'm also sure I’ll need to start thinking about how to set-up an autopilot portfolio (Vanguard LifeStrategy anyone?) but that’s for another day.

This strategy and portfolio is an essential enabler to how I want to live my later life – one not burdened by the need to work for The Man but instead able to focus 100% on what’s important to me which enables both location and time freedom.  Given its importance I like to stop every quarter and in line with my Plan, Do, Check, Act (PDCA) strategy do some Checking against the three key focus areas that I believe are essential to get over the Financial Independence line - Save Hard, Invest Wisely and Retire Early.

Saving Hard is defined as Gross Earnings (ie before taxes) plus Employee Pension Contributions minus Spending minus Taxes.  Earn more and one is winning.  Spend less or pay less taxes and you’re also winning.  Savings Rate is then Savings divided by Gross Earnings plus Employee Pension Contributions.  To make it a little more conservative Taxes include any taxes on investments but Earnings include no investment returns.  This encourages me to continually look for the most tax efficient investment methods.  It’s a different and tougher measure to most of my fellow personal finance bloggers who don’t include tax in the calculation.

Savings Rate for the quarter ends at 53.8% against a plan of 55%.  This is identical to last quarter.  While not achieving plan in pounds, shillings and pence it’s actually 56% more than I managed in Half 1 2014 thanks in part to a healthy bonus. 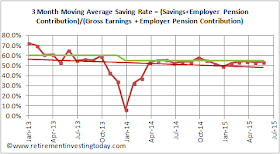 Saving Hard score: Conceded Pass.  While not achieving a plan of 55% in pound terms I’m a long way above 2014.  Savings have also added 7.6% to my net wealth in the first half of the year – a surreal amount given I’m towards the back end of my Financial Independence Retire Early (FIRE) journey.

The vast majority of my investment portfolio is made up of passive index tracking funds.  Why?  Well as a person who’s now been investing heavily for a bit over 7.5 years I personally believe this is the best way for me to achieve my wealth ambitions.  One exception to this is my High Yield Portfolio (HYP) which is held within the Equities portion of my portfolio and can only be described as active investing.  So if I'm a tracker believer what am I doing actively investing I hear you ask. 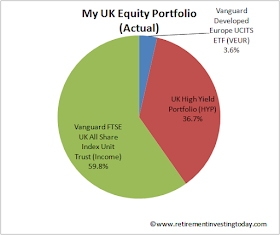 Simply, while 99% of my investing is all about non-emotional investing my HYP is an outlier as it’s there for psychological reasons.  I’m now fast approaching optional very early retirement and when in that retirement I’m going to be likely 100% living off my wealth.  I’m going to do this by drawing down from my wealth at the rate of 2.5%.  I have two ways to do this – spend dividends/interest and/or sell down capital.  For me, particularly in a severe bear market, I think that spending dividends/interest will psychologically be far easier and less disruptive to life than being forced to sell down capital.  With that in mind before retirement I’m trying to ensure that the dividends/interest I receive annually is as close to 3% of wealth as possible.  If I can achieve 3% in the good times I can draw down 2.5% and reinvest 0.5% and in the bad times I have some buffer to allow for dividend attrition.

This psychological advantage is however a fool’s errand if it causes my total portfolio to underperform the market.  Unemotionally what matters is Total Return which is Capital Appreciation plus Dividends.  So with this in mind I watch my HYP performance, particularly capital gains, like a hawk.  So as we pass the mid-year point of 2015 let’s take a look at my HYP's performance to date.

Firstly to what the HYP is all about – Dividends.  Performance here is still very good with the portfolio currently sitting on a trailing yield of 5.2% which is 1.4 times the FTSE100’s 3.6%.  So far so good.

While my recent posts on sequence of returns risk during drawdown and bond to equity volatility vs returns are still fresh in our minds let’s return to our retiree's who are another drawdown year on having now been in wealth drawdown for 8.5 years.

For long term consistency I want to make as few changes to the original assumptions as possible however this year one change would seem prudent.  To represent the equities portion of the portfolios I use the iShares FTSE 100 UCITS ETF (ticker: ISF) as a proxy.  This year that ETF has become an iShares Core Series ETF resulting in a TER change from 0.4% to 0.07%.  I'm going to allow that change to occur within the assumptions as it simulates a real change that an investor might see.  All other assumptions are unchanged from the original post.  Re-emphasising some of the key assumptions:

I've picked a 4% withdrawal rate because of the often quoted (dangerously in some cases IMHO but that’s for another day) 4% safe withdrawal rate rule.  The 50% equity : 50% gilts portfolios (the red lines on the chart) are the closest representations to the 4% rule with obvious differences being that: