When presenting my current financial situation or giving quantitative examples about financial problems (whether as thought experiments or actual experiences) regular readers will have probably noted that I typically always try and talk in percentage terms rather than absolute numbers.  Why do I do this?

Firstly, let me demonstrate what I’m talking about with a simple example.  Let’s say in Early Retirement I have calculated that my spending will be £20,000 per annum before tax and I've decided that I will drawdown on my wealth at the rate of 2.5%.  Running the maths tells me that I’ll need to accrue £20,000 / 2.5% = £800,000 of wealth before I'm financially independent and can take an early retirement that doesn't require any extra earnings other than those that come from the portfolio in the form of dividends, interest or capital gains.  I’m still a bit short of the target at the moment having only £500,000 stashed away in various asset classes.  There would be two ways I could present these facts:
So back to the original question, why only talk percentages rather than absolute numbers?  Simply because every reader including myself is an individual with different earnings, wealth targets, wealth requirements, needs and wants.  Therefore the fact that I have £500,000 currently invested is completely irrelevant to every reader but me.  However some of the principles or theories that I or other readers valuably contribute via the Comments could be very relevant making it worthwhile to go off and conduct further research.  What I have however found is that when I stray away from percentages the thought I’m trying to get across can be lost amongst the discussion about the numbers used.

It’s All About Living Well Below Your Means

I've mentioned previously in passing that as I build the wealth necessary to reach Early Financial Independence I'm noticing that the major wealth contributor for me has actually been the Saving Hard portion of my strategy rather than the Investing Wisely.

Let’s firstly quickly remind ourselves of what each portion contains.  Saving Hard is the methods used to acquire Capital for investment.  For me that is a full time professional career with Megacorp where I’m continually working to Earn More, as well as continually working on methods to spend less, while achieving the standard of living my family desires.  The spending less is typically called Living Below Your Means or LBYM in the financial independence blogosphere.  Investing Wisely is the methods used to maximise return on that Capital.  For me it includes low investment expenses, tax minimisation, modern portfolio theory, tweaking of asset allocations based on market valuations and even my HYP.

The below chart separates the wealth I've personally built each year from both Saving Hard and Investing Wisely.  Every year except 2012 more wealth has been built from Saving Hard.  It even includes the last couple of years where significant monthly savings are given to my better half so that Financial Independence day is synchronised.  So as I alluded to at the start of this post for somebody like myself who’s trying to become Financially Independent in 10 years or so Saving Hard is essential. So Saving Hard is important.  Let’s look at each element in turn.  When it comes to Earning More I've been fortunate, having been able to increase earnings by 128% since 2007, however I can also say it has come at a price.  I am also very aware that in the modern continually globalising economic climate where average earnings in the UK are increasing at a less than inflation 1.3% this is currently not easy and importantly is not 100% in our control.  I'm going to ignore Earning More for the rest of this post for these reasons.

10 Habits to Become a Millionaire

Anton is a 27 year old dollar millionaire – at least in net wealth terms.  While he seems to have made about two thirds of that wealth through the US equivalent of leveraged Buy to Let property investment it’s still a pretty impressive feat.  Building that type of wealth in such a short time is not a lot different to what I’m trying to achieve, that is financial independence giving the option of early retirement in less than 10 years.  His 10 Habits That Made me a Millionaire post this week therefore intrigued me.  Let’s look at these 10 habits in turn and compare notes.

I have a proverbial shopping list of financial goals that I've set and then track myself against.  They cover everything from weekly targets for fuel economy on my monster commute and grocery shopping spend targets through to longer term goals including the amount of wealth I require for financial independence including timescales to get there.  I even go one step further and publically score myself against some of these goals at regular intervals.

2. Religiously Tracking My Net Worth

If you’re chasing financial independence then the buck stops at Net Worth.  I have recorded the values of every one of my investments which I then sum to give net worth every week since 2007.  I've never missed a week.  From that history I can then build charts like that below which track my progress to Financial Independence.  It also enables me to easily measure progress against my goals. 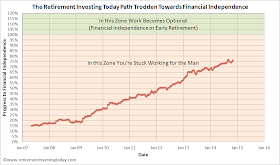 3. Having the Discipline to Save 60% of My Income

He doesn't say whether this is Gross or Net Income but for a long time I was saving 60% of the more difficult Gross.  I've had to recently relax that to 55% only because a recent healthy pay rise has pushed me well into Higher Rate Tax where including National Insurance I'm losing 42% which makes it impossible to save 60% of Gross.  With that in mind I'm declaring a pass against this habit.