How difficult is it to segregate our assets

In the modern, in my opinion overly complex, financial world there must by now be nearly as many investment risks as there are grains of sand on that now long forgotten Spanish beach where you spent your summer holiday.  One of these is that your broker/wrapper/online provider goes belly up and takes your wealth with it because they failed to segregate your assets from their own through fraud, negligence or even good old fashioned incompetence.  Here I am currently most exposed through my SIPP provider Youinvest, my ISA provider TD Direct, my trading account provider Hargreaves Lansdown and the large insurance company (the name of which I won’t mention as I could never recommend any element of their offering) who ‘looks after’ my defined contribution pension offered through my employer.

It’s a risk I've known about for some time but on a scale of risks that I’m conscious of I had it ranked fairly low, thus wasn't doing too much about, as I thought that:

News this week tells me that my assumptions were naive and just plain wrong with Barclays investment arm having owned up to having “£16.5bn of clients' assets "at risk" between November 2007 and January 2012”.  This is neither a small amount of money nor a short period of time.  It also happened to occur during the period when Barclays was in severe financial difficulties and had to be ‘bailed out’ by the state investment funds and royal families of Qatar and Abu Dhabi to the tune of £7.3 billion.  It’s also not the only time with them having been penalised back in 2011 for “failing to ring-fence client money in one of its accounts for more than eight years”.  Of course Barclays say that ‘it did not profit from the issue and no customers lost out’ but they would say that wouldn't they and given the timing it could have easily been a very different story.

Only three weeks ago I was writing about my 75% of the wealth required to retire milestone and now as I sit writing this post, drinking a tasty homemade coffee which is helping me save hard ( ), it’s time to write about yet another.

Today my top level asset allocation looks like this: 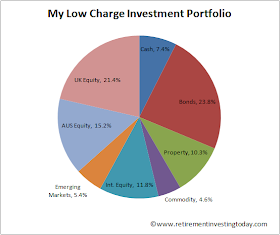 The detail behind this is still very much in line with my strategy that I first published in 2009.  Between the 04 January and 02 August 2014 (funny dates as I record my financial position weekly) this investing wisely portfolio returned 3.9%.  Move forward to today and that year to date return has morphed into 7.0% in around a month.  Should long run history repeat to average this portfolio should return about 4% per annum in real inflation adjusted terms over the long term (it’s returned exactly that since I started this journey in 2007) going forwards.

On top of that I continue to work on methods to save hard: 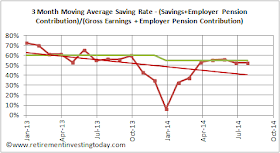