As part of the UK Budget 2014 George Osborne briefly announced the next tranche of government pension tinkering.  More detail in the form of the fifty page document entitled Freedom and choice in pensions : government response to the consultation has just been published so let’s briefly look at what I think is the good, the bad and the ugly as far as I'm concerned.

The Budget included the announcement that from April 2015 pension holders would get unrestricted access to their personal pension savings.  The mainstream media became all excited and started talking about people cashing in the lot and buying Lamborghini’s.  I ignored this nonsense and thought it actually might give responsible people (like myself?) who are saving for their future an intangible benefit so have been keenly waiting for the detail.

I currently have 44% of my wealth tied up in Pension Wrappers as they have the potential to (I say ‘have the potential to’ and not ‘will’ as once you’re in it’s difficult to get out again without punitive taxes and governments are guaranteed to continue to tinker) give me a healthy reduction in tax over my lifetime.  This comes from a few areas:

I have been using Yorkshire Building Society (YBS) as my Savings Account provider for a few years now.  While once at the top of the best buy league they haven’t been there for some time now.  They have however always been pretty close from an interest rate perspective and have been no nonsense from a T&C’s perspective.  I was receiving 1.5% AER meaning as Higher Rate Tax payer and with inflation running at 2.6% I was receiving a Real interest rate of -1.7%.  In other words every pound sitting in YBS was being devalued monthly.

Recently, they have sent me a letter which starts out with “As your building society, you'll know that we have a tradition of looking after all our customers with good value products and great service...” Great start but of course the small print advised that they were further reducing my savings account interest rate to 1.25% AER.

Of course I’m not surprised given the latest average savings account data from the Bank of England shown in the chart below which show instant access savings rates down 0.27% in the last year. 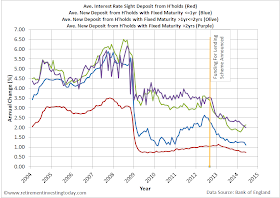 Going to the market for the latest best buy savings accounts reveals very little.  Moneysavingexpert.com recommends the Santander 123 current account which has sliding scale interest rates (between 0% and 3% AER), a monthly fee and minimum deposit requirements.  The best clean rate looks to be Britannia or Coventry BS with a 1.4% interest rate but these accounts can’t be run online.

The June distribution laggards have now paid up so let’s take a pause to validate whether the tools and techniques from this site actually work in the real world.  This is achieved by my living the Save Hard, Invest Wisely, Retire Early mantra.  I'm a real life guinea pig putting my own money where my mouth is.  A mistake in one of my concepts could affect not only me but also my family greatly.

It’s now my sixth year of aiming to save 60% of my earnings, where earnings are defined as my gross (ie before tax) earnings plus any employee pension contributions.  Changes over the past six months mean that this target is now out of reach and a revision to a 55% target is needed.  Before you start flaming me I confirm that I haven’t been a hypocrite and started a consumerist lifestyle.  Instead the change has been caused by a healthy salary increase which is taxed at the 40% Higher Rate plus 2% National Insurance making 58% the most I could save from this new money.  Additionally, to keep my better half and I on the same financial independence trajectory this increase means I now need to cover all of the household costs as well as direct some of my savings to my better half’s investment portfolio.

In addition this half year saw HM Revenue and Customs change tune and make some aggressive demands for a tax error that they made in the 2012/13 tax year which enabled me to regularly save in the high sixties/low seventies. 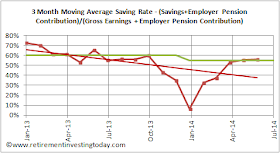 Saving hard first half score: Conceded Pass.  Without the HMRC recovery, which I’d already saved in previous periods, the savings rate would have been held.  Since sorting this the new 55% savings rate has been sustained.

A Sobering Income Drawdown Demonstration One Year On

When we left our UK Invested Income Drawdown dependent Retiree’s a year ago there was trouble afoot.  Our 4% Withdrawal Rate Retiree, which remember is the Safe Withdrawal Rate (SWR) Rule of Thumb many talk about and even use, was particularly vulnerable having lost between 11% and 24% of wealth in only 6.5 years.  Since then a couple of notable things have occurred:

Going forwards this is going to make life interesting.  For a retiree to draw down £24,856, the equivalent of current average UK earnings (Office for National Statistics KAB9 dataset), requires wealth (including Pensions, ISA’s and non-tax efficient investments) of £814,950 if we are to minimise depletion risk over 30 years according to Pfau’s research.  At the same time from next year we can grab whatever we like from a pension pot that on average only contains £36,800 at retirement according to the Association of British Insurers.  Of course many of us don’t just save in pensions (for example only 43% of my wealth is in a Pension of which only 14% is sitting with expensive inflexible insurance companies) and of course not all of us will withdraw crazy amounts to buy Lamborghinis (if the rules haven’t changed I’ll be withdrawing as much as possible to keep my total earnings just below the Higher Rate tax limit with the difference between spending and withdrawal being put into an ISA) but it’s probably uncontroversial to suggest it does have the potential to leave the uneducated very exposed.

With that in mind let’s look at how our UK Invested Income Drawdown dependent Retiree’s are doing one year on.  For consistency all assumptions are unchanged.  Re-emphasising some of these assumptions: