How to Become a Millionaire

Let’s define our Average Joe.  I’m going to assume our Joe is not an “Average Earner” but instead intends to pursue a “profession” which will start on a salary of £20,000 at age 21 and finish on a salary of £40,000 at age 68 (State Pension Age for today’s young), for an average lifetime earnings of £30,000.  I can think of many arts, sciences or technical university/apprenticeship routes that would enable this level of attainment through persistence.  Our Average Joe also doesn’t aspire to the 60% savings rates that I do but does realise its important and so religiously saves 20% of earnings every month leaving plenty of cash for consumption today.

It’s been a surreal week.  Midway through it I received a phone call from a good friend who has just returned from the third family holiday of the year.  However this time instead of talk of how great the holiday was I was greeted with an “I'm in financial difficulty and could I borrow some money from you?”  A little clarification revealed we weren't talking about twenty quid until next payday but thousands of pounds.  I was dumbstruck.  Why?

My friend is intelligent, has a very similar educational background to my own and has been working a similar amount of time.  We have similar jobs, albeit at different companies, but I would guess our salaries are probably within 10% of each others.  We do however live very different lifestyles.  To give some examples:

I must be clear here.  I don’t begrudge my friend’s family any of the above.  Everyone in this world is entitled to live their own lives and make their own choices.  I've chosen to Save Hard, Invest Wisely and Retire Early which today means I have accrued 72% of the wealth I need to secure financial independence.  My friend’s family has chosen to live for today.  I’d never really thought about the differences between us previously but when you look at the differences above we are at very different stages in life and on a very different life path.  The now clear disparity in wealth really did bring the book The Millionaire Next Door

by Thomas Stanley into the forefront of my mind.  The only difference is that I don’t have a million pounds nor do I think I will need that much for financial independence as I've found plenty of ways to live well while spending less.

A quick glance at one of the many FTSE100 charts published by the mainstream media might start to get the average punter a little excited. 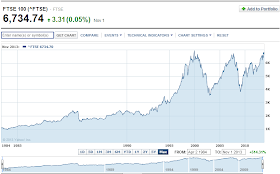 Am I getting excited?  In short, no.  This is for a few reasons:

Let’s firstly remove some of excitement by: 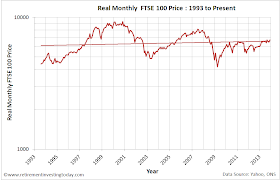