Running this site brings a number of benefits.  To continually provide original content it forces me to continuously research beyond that of the mainstream media, which I find generally contains a lot of vested interests.  It also keeps me accountable to my original Retirement Investing Today philosophy.  If I can’t walk the Save Hard and Invest Wisely for Early Retirement line then how can I expect others to consider following my footsteps, after having done their own research, when I’m not living what I preach.  Yet so often amongst the world of “experts” we see just that.

Let me give a very simple example.  I’m generally a fan of The Motley Fool, particularly the forums, however take some time to read These Savvy Investors Have Just Hit The Jackpot which I thought would be relevant given I added Vodafone to my HYP back in December 2012.  Besides the article being full of errors it was the last sentence that really did it for me – “Maynard does not own any share mentioned in this article.  The Motley Fool has recommended shares in Vodafone and GlaxoSmithKline”.  So somebody is prepared to write an article about how great something is but isn’t prepared to put any of his own skin in the game.  That’s certainly not how this site works.

The negative of my approach is that you the reader generally only ever see one viewpoint, which is my life.  Of course the much valued Comments provide different viewpoints which benefit everyone but I also get an additional benefit, email from readers, which is what today’s post is all about.  A couple of weeks back I received a well thought out email which used some of the regular data that I publish on this site but which was used to answer a different question to that which we usually look at.  Some of the conclusions were also slightly contrarian.  After some email banter that reader has generously allowed me to publish that email.  I hope you enjoy the different viewpoint.

The big question - Do retained earnings find their way to the shareholders via share price growth?

After a lucky run in business I retired 5 years ago aged 40.  As only a third of my portfolio earnings are paid out as a dividend I have been searching for an answer to this big question.
I came across your FTSE 100 Cyclically Adjusted Price Earnings Ratio (FTSE 100 CAPE) Update post and I'm certain the answer is in there but you need to look at the data slightly differently. Please stay with me as you will love the outcome.

Use Technology for Early Retirement and Not to Extend Wage Slavery

Looking back over my short 40 and a bit years, technology and access to it really has exploded.  Thinking about technology a little deeper though and I start to wonder whether the majority of people really are using it or whether it’s actually using them.  Let’s look at a few examples.

Credit cards may not be a technology in the strictest sense of the word but technology advancement sure has helped make them an everyday item.  It’s debatable as to who or what was the first credit card, but roll the year to 1951 when 200 pre-approved persons were able to present a Diner’s Club card at 27 New York restaurants and you have something that sounds pretty close to what we have today.  Except even in my “early” years, some 30 years or so post 1951, I remember my parents not even possessing a credit card but instead choosing the debt free alternative, layaway or lay-by.  Fast forward to today and it’s rare to find somebody who doesn't possess a credit card.  Unfortunately this great convenience seems to have been used by the majority to bring forward consumption by piling on debt at the expense of either larger consumption later or earlier retirement.  Instead let me demonstrate how I use my credit card (yes I have a credit card and also save 60% of gross earnings).  I buy everything I need (of course my definition of need is very different to that of many) on credit card knowing that I have the money in the bank.  I get the item now but depending on when in the month I make the purchase I don’t have to stump up the cash, which automatically happens via direct debit, for between 1 and 2 months.  Over that period that money is earning interest for me, adding to my wealth and bringing retirement that little bit closer.

I remember my first computer, which also came in the 1980’s.  It was an IBM XT clone desktop with a processor capable of 4.33MHz and a ‘turbo’ button which pushed that to something like 10MHz.  It had a 20MB hard drive, a CGA monitor and two 5 ¼” (remember those?) floppy disk drives.  It certainly didn’t have a microphone or a camera and in hindsight it did very little to better my life.  Today we have Smartphone’s, Tablet’s and Laptop’s with multiple GHz processors, 100’s of GB (if not TB) hard drives and high definition screens.  Combine that with the internet which was still in its infancy in the late 1980’s and the opportunities to create extra wealth are today nearly endless.  The majority of people just don’t see or don’t want to see the opportunities. Let’s look at a few.

Kitco tells me that Gold when priced in USD’s closed on Friday at a nominal $1,395.50.  Convert that into GBP’s and you’re looking at a Nominal Gold Price of £899.35.  Staying in Sterling that is a Nominal Gold month on month price rise of 6.1% and a year on year price fall of 13.1%.  The chart below shows the Nominal Monthly Gold Price in £’s since 1979. 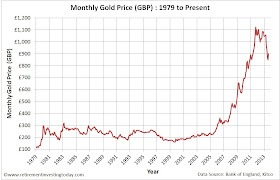 If we then adjust this Gold chart for the continual devaluation of Sterling through inflation we can see Real Gold Prices which are shown in the chart below.  If this is of particular interest then you might also be interested in understanding if Gold can protect UK Investors from inflation.  The key Real Monthly Gold Price metrics are: 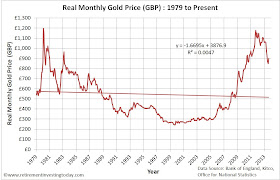