This is the monthly UK House Affordability update, which is the metric that I believe is the key driver of UK House Prices.  It also updates UK House Value which is the metric I am using to assess when it is time to buy a UK home and Sales Volumes.  The last update can be found here.

Let’s first update the key data being used to calculate both UK House Value and UK House Affordability plus report on Volumes:

Dividend Reinvestment is a must to Maximise Wealth Building


There are almost as many investment strategies as there are financial websites.  These might include everything from you must buy this share as it’s a guaranteed ten bagger through to a fund that looks like it will protect you no matter the economic weather.  Of course the strategies discussed will also likely be dependent on whether the person writing the strategy has a vested interest of some description.

I’ve laid out my strategy for all to see however it glossed over an exceptionally important element.  That element is share dividends and specifically how crucial it is to reinvest them while you are building your portfolio.  If you are a UK Investor Monevator touched on this topic back when I was first starting on my Retirement Investing Today journey and more recently DIY Investor has also reinforced their importance but it’s the must have Investing Bible for UK Investors that really reinforces the point with the section entitled “Spend dividends at your peril”.  Dividend reinvestment is important because it is likely they make up a significant proportion of the total return that comes from your individual share holdings, High Yield Portfolio (HYP) or Index Tracking Fund to name but three.  By reinvesting you both get that extra cash into your portfolio, instead of being tempted to buy something you likely don’t really need, but additionally you also then get those dividends compounding year on year.

Let’s look at whether reinvesting dividends is still important in more recent times using my recently built FTSE100, FTSE250, FTSE Small Cap and FTSE All Share data sets.  For today’s analysis I am using the period 18 March 2008 (the first date I was able to source all data required) to the recent market close of the 28 March 2013.  The annualised return or compound annual growth rate (CAGR) for capital growth only and dividend reinvestment for these four datasets is shown below.


There are many UK stock market Indices, each of which is trying to measure something different.  The one mostly reported by the mainstream media is the FTSE 100 which is also the Index we regularly use to value the UK stock market.

This week I was looking to dive a bit deeper into some of these other UK Indices to conduct some more detailed analysis.  I trawled the internet for datasets but surprisingly, given the sheer amount of financial data freely available online, I came up blank for sensible datasets.  I therefore had to put my more detailed analysis on hold and spend a number of hours reconstructing a number of FTSE UK indices.  While I haven’t conducted a large amount of analysis yet I thought it was worth sharing the data as it will form a basis for a number of pieces of analysis I intend to do going forward.

The FTSE indices I’ve chosen to reconstruct are:

Each of these Indices has two variants.  The first is the Price version of the Index which is the weighted market capitalisation of the companies within the Index on the day of interest.  These are the Indices you usually see on television or in the papers.  The second is the Total Return Index which assumes that all dividends (or other cash distributions) are reinvested back into the Index.  By looking at the change in both of these Index values between any two dates you can calculate a lot of interesting information which includes:

Charts for the FTSE100, FTSE250, FTSE Small Cap and FTSE All Share Price and Total Return Indices can be seen below.  These take the value of the respective Index on the first possible investment day of each month. 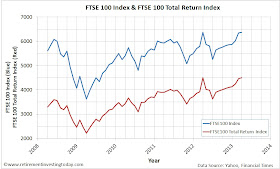 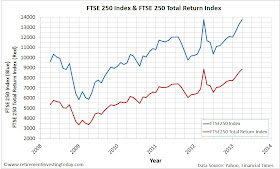 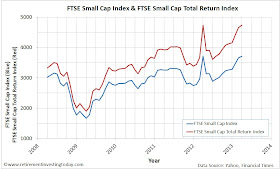 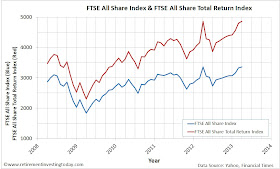 As I’m writing this post the mainstream media is telling me that Gold, when priced in its globally quoted, currency is trading at $1589.50 an ounce.  In recent times when priced in US Dollars Gold has been tarnishing somewhat (and I used to think that it was only Silver that tarnished).  Compared with the February 2013 average it has fallen in price by 2.3% and compared with the March 2012 average it has fallen by 5.0%.  If you’re an Investor paid or spending in US Dollars then these are probably relevant numbers however as a UK Investor the numbers are bordering on being meaningless.  Let’s therefore have a look at what is happening to Gold when priced in Pound Sterling.  If you’re interested in history the last update of this metric was in January 2013.

The chart below shows the Nominal Monthly Gold Price in £’s since 1979.  The key Nominal Gold metrics are: 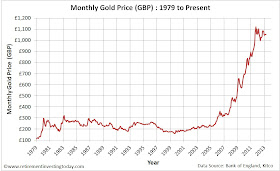 In contrast with US Dollar Investors we can see that UK Investors are just not seeing price falls.  This is caused by Sterling devaluing against the Dollar at a rate pretty close to the fall in Gold Prices when measured in its globally quoted currency.

This is the Retirement Investing Today monthly update for the FTSE 100 Cyclically Adjusted PE (FTSE 100 CAPE).  Last month’s update can be found here.

As always before we look at the CAPE let us first look at other key FTSE 100 metrics:
So we find ourselves in a continuation of the interesting situation that I highlighted last month.  Nominal Earnings are falling off a cliff and have been consistently falling since October 2011’s Earnings of 628.  They are now down 28.5% since then yet in comparison Prices are increasing.  Nominal Prices are up 27.7% over the same period.

The first chart below provides a historic view of the Real (CPI adjusted) FTSE 100 Price and the Real FTSE 100 P/E.  Look at the trend line of the Real Price.  After you strip out the effects of inflation the perceived market value is doing not much more than oscillating above and below a flat line which we are now sitting on.  The second chart provides a historic view of the Real Earnings along with a rolling Real 10 Year Earnings Average for the FTSE 100. 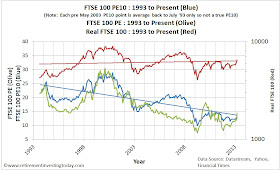 With the mainstream media this week reporting new nominal highs for the Dow Jones Industrial Average lets also run our own regular analysis of the US market to get some detail on what is really going on in this market.   As always instead of the Dow, which only looks at 30 large companies, we’ll turn our attention to the S&P500 which looks at 500 leading public companies.  Last month’s update can be found here.

Before we crunch the numbers it’s worth pointing out that while titles like Asian markets climb after Dow Jones hits record high make for great headlines, I can’t help but feel that this is misleading the general public as they might actually think that the market is at new highs.  Of course regular readers will know that Dow isn’t at a new Real (inflation adjusted) high, but only at Nominal highs, as the unit of measure that the Dow and S&P500 is measured in, the US Dollar, is constantly being devalued through inflation.  When it comes to the S&P500, the Real high was way back in 2000 and we are still some 22.5% below that level. 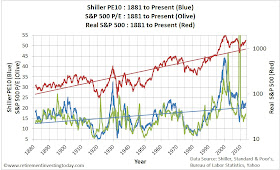 This is the regular UK mortgage interest update for March 2013.  The headline for this month is that the UK Government / Bank of England market manipulation scheme known as the Funding for Lending Scheme (FLS) is working.  Last month’s update can be found here.

Let’s firstly look at the raw data.  The Bank of England publishes a number of datasets on this topic and I have picked 5 which cover the more common mortgage types available today.  They are the sterling monthly mortgage interest rate of UK monetary financial institutions (excluding Central Bank) covering:
A history of these mortgage rates can be seen in the chart below which also shows the announcement dates of some of the well known schemes that have had a large effect on the market, namely a Bank of England Bank Rate of 0.5%, 4 tranches of Quantitative Easing and Funding for Lending. 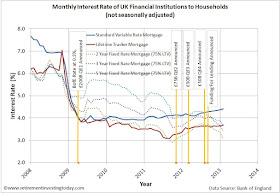 What this all means is that today an average 2 year fixed mortgage can be had for a real (inflation adjusted) rate of -0.22%.  Yes you read that right.  Mortgage rates in real terms are negative.  3 and 5 year real rates are also negligible at 0.13% and 0.37% respectively.  The question is how much lower can they drive rates in nominal terms?  I can’t see it being much further given that the Bank of England want and will do everything they can to engineer inflation.  Tracking these rates for the next few months will give us a good steer.