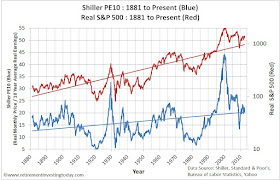 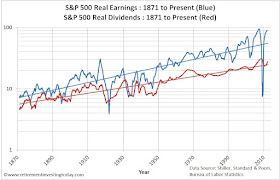 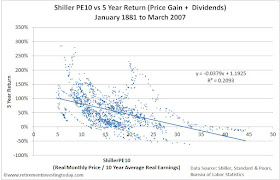 As I write this post the S&P 500 is priced at 1,310.  By my calculations I have current earnings at $91.4 for an S&P 500 P/E Ratio of 14.3.  The earnings I use are as Reported Earnings, as opposed to the much more ambitious Operating Earnings, as I believe these are a much more appropriate (and conservative) measure.  As a quick reminder Reported Earnings will typically always be lower than Operating Earnings as they include the cost of non-recurring items such litigation charges, costs of shutting a factory and good will write downs to name but three.  Now it’s only my humble opinion, but I believe these are real and true costs incurred by the business, even if they are non-recurring and so badly want to be excluded by the “Company Bean Counters”.

Let me also be clear on how I calculate the Reported Earnings.  I am using the Earnings as published by Standard and Poors.  At the time of writing they have published:
I then extrapolate these figures to cover a year to the end of May 2012.
RetirementInvestingToday at 21:23:00 2 comments:
Share 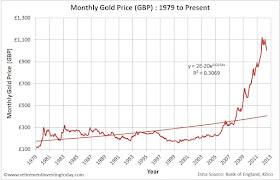 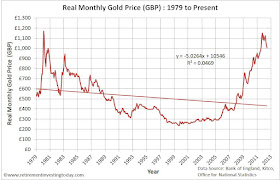 I haven’t written about gold priced in Sterling since June 2011.  Since that time it reached a new all time nominal Monthly Gold Price high of £1,121 in September 2011 and has since fallen back to £1,003 as of Friday.  All of this action can be seen in my first chart.

For me though, it’s my second chart which corrects for the devaluation of sterling through inflation, that is the important one.  This chart, which shows the Real (inflation adjusted) Monthly Gold Price, reveals to us that the peak in September came within 2% (£1,170 vs £1,151) of the January 1980 real peak before the fallback.

Real gold today is still well above its long run average of £515 still indicating large overvaluation and if it was to follow the history of 1980 has a long way to fall before a bounce.
RetirementInvestingToday at 16:44:00 No comments:
Share
‹
›
Home
View web version